More Than £800 Raised By 7-Seater Bike At Ashton Gate

They have already raised thousands for the West Country charity and the team of thirteen is back with the giant bike in a bid to raise over £20,000 for Children’s Hospice South West.

Over the weekend Mag7 and the 7-seater bike came to Ashton Gate for the Bristol City and Bristol Rugby games. The team raised more than £850 through a bucket collection across the two days.

Organiser David Butt said: “we really enjoyed ourselves and managed to ride around the concourse. We raised a great amount but it isn't just about the money, it is about raising awareness for Children's Hospice South West."

After leaving Ashton Gate on Sunday the team headed down to Taunton then on to Tiverton, Exeter Princesshay, Dawlish, Teignmouth, Shaldon, Paignton, Torbay, Totnes, Plymouth, Liskeard, Dobwalls, St Austell, Fraddon and ending in Truro on Saturday.

Team leader Steve Warner said: ‘With a bike that weighs ¾ tonne, this is no easy feat and to make it even more of a novelty, we’ve decided to link with the Rugby World Cup and we will be attempting to create the longest rugby ball pass.

‘We’ll be carrying a rugby ball that will be signed by sporting stars and celebrities along the route, and we’re hoping that this will help us raise even more funds to help to support life-limited children and their families.’

Bristol Rugby chairman, Chris Booy and his wife Jackie joined the team and rode the bike across Bristol’s Suspension Bridge on Saturday morning. 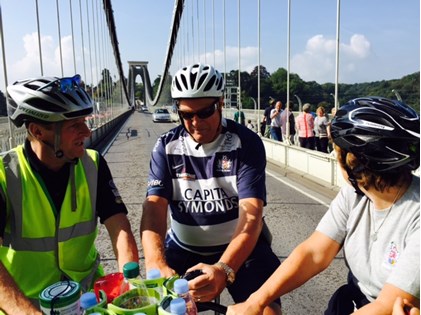 David added, "we are very grateful to Chris Booy and all staff at Bristol Sport for their support."

Children’s Hospice South West provides the only hospice care for children with life-limiting conditions in the South West. These are children that are not expected to survive into adulthood.

The three hospices provide respite care and support for those children and their families, who have to cope with the most difficult situations.

To donate to the Children’s Hospice South West click here.

World Cup Review: Round One