The club used the opportunity to showcase its status as a beacon club as the most talented youngsters from the south-west came together to compete in a match prior to the main event.

The Beacon programme, which is supported by Bristol Sport, is open to all young players in the region and is designed to help talented young athletes progress from club water polo to the national team. The Beacon athletes train at least three times a week with many already making the national junior programmes. Two mixed teams of youngsters ranging from 14 to 16 years-old, competed on Saturday in front of more than two hundred people. 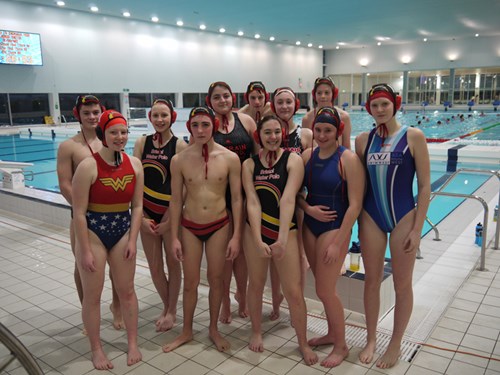 A friendly high-scoring game ensued as these two teams put into practice the skills learnt in Beacon training.

Central’s British Championships game against Manchester City was in contrast a low-scoring affair as both teams battled for pole position in their qualifying group.

Despite two goals from Bristol in the last minute of the game the home team couldn’t overturn a strong start from their northern visitors going down 4-3.

Jonny Kirk and Tom Hadley came out firing to give Manchester a two-nil lead in the opening quarter and Central found themselves immediately on the back foot.

Central tried to break down Manchester’s defence in the second quarter, but to no avail, as they slipped a further two goals behind courtesy of Joe O’Regan and Tom Hadley once again, to go in trailing by four at the halfway mark.

Central rallied in the second half and were unlucky not to convert a couple of excellent opportunities, denied by the woodwork and Manchester’s goalkeeper.

Excellent work by Andrew Crawford in goal prevented Manchester extending their lead and finally Central’s Enrico Zanon gave the 250-strong crowd something to cheer about from an extra-man play.

Going into the fourth quarter, trailing by three, Central had plenty of opportunities to pull back the deficit. However, it wasn’t to be despite three extra-man advantages Central couldn’t find the back of the net.

It was only in the final minute of the game that Central scored two goals in quick succession. One from GB Olympic captain Craig Figes who fired in an outside shot with 34 seconds remaining. Moments later the Manchester keeper gave away a penalty, which Bristol’s Ashley Castle clinically converted in the final second of the game.

Bristol Central remain second in their group and now have to win their last two games to make the finals.

Central’s next game is against Portobello at Hengrove Park on Saturday, March 28th at 5:30pm.